The Visualization of the Poems of Adonis 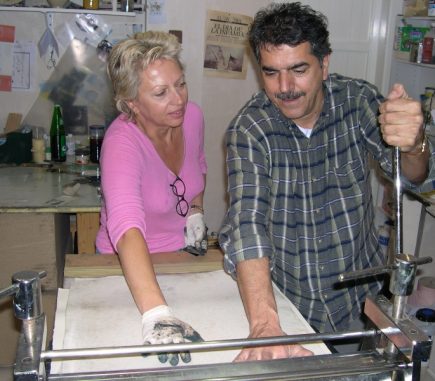 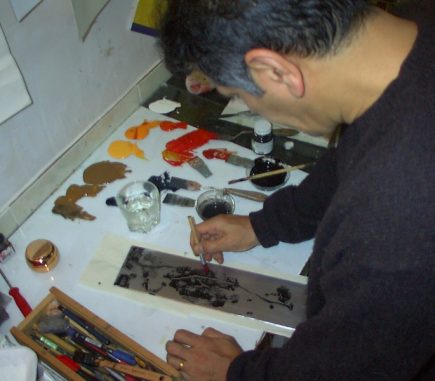 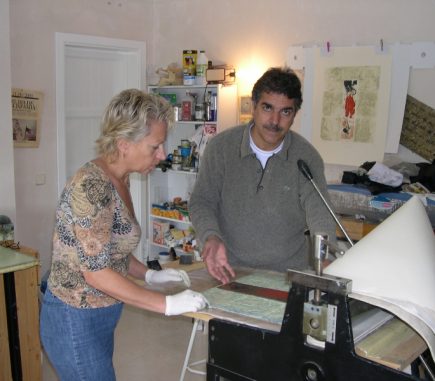 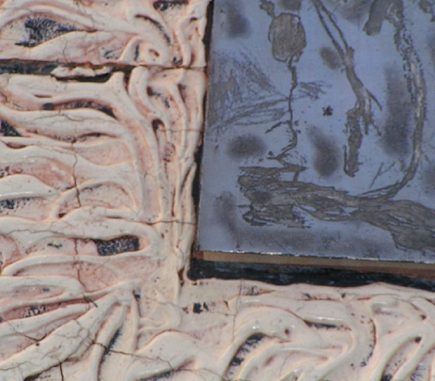 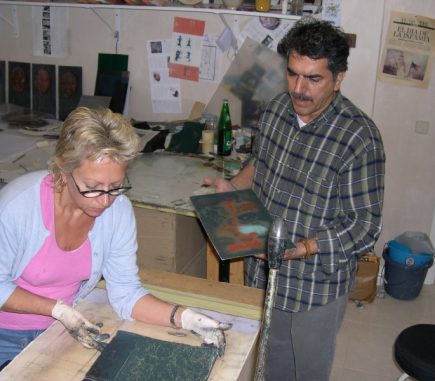 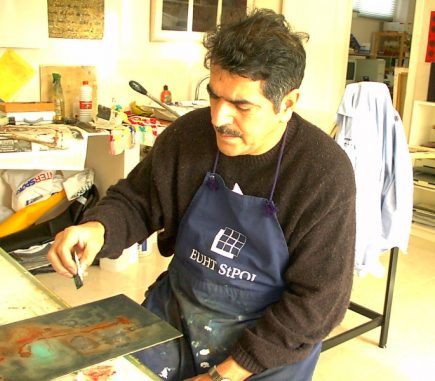 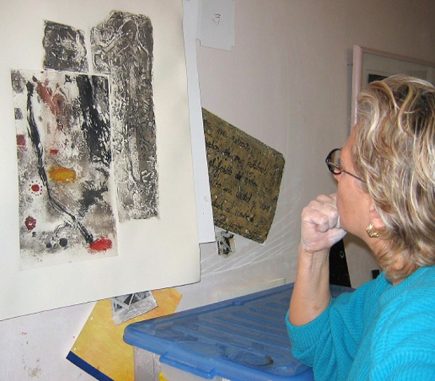 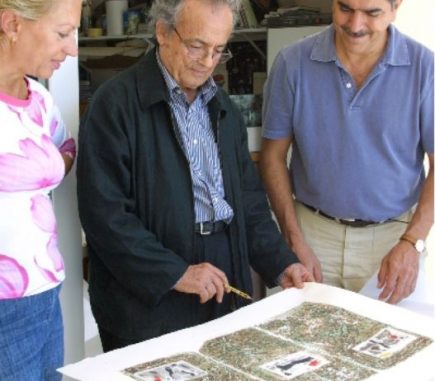 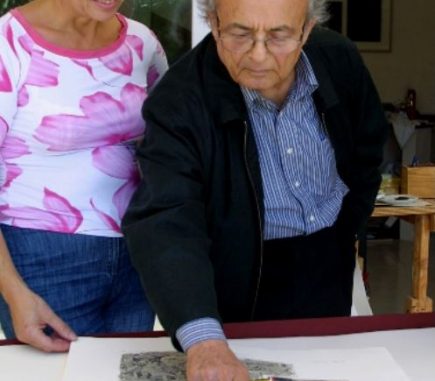 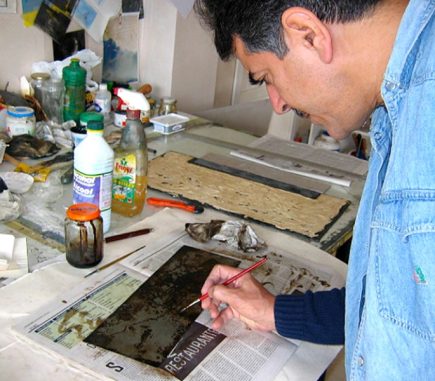 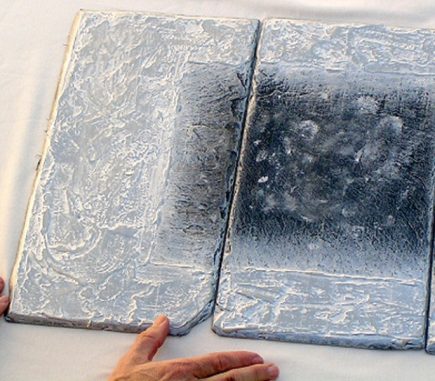 The plastic artists and engravers Bruni Heym and Jafar T. Kaki have produced, in collaboration with the Pilar and Joan Miró Foundation, a book of engravings, created from the poetry of the great contemporary Arab poet Adonis, which has acquired universality through his works.

After choosing ten poems by Adonis, both artists began to work on their plates individually and using different techniques.

Bruni Heym uses colography on fragile slate plates, a very novel technique that only she uses and that allows her to express Adonis’ poems.

Later combining the images in the same print. Jafar Kaki uses zinc plates that he works with etching, aquatint and its variations, as well as his own techniques that characterize his work.

Be one of the exclusive owners of a masterpiece.

This artist’s book, with a limited edition of 30 copies, contains 10 original prints, numbered and signed by Bruni-Heym and Jafar T. Kaki, artists known for their personal careers. Each engraving corresponds to a poem, written and signed by Adonis, the Syrian-Lebanese poet who was a candidate for the Nobel Prize for Literature and guest of honour at the Prince of Asturias Awards in 2006.

Adonis has been a strong candidate in recent years for the Nobel Prize in Literature and was guest of honour at this year’s Prince of Asturias Awards.

Adonis Visual Poems were presented in Palma de Mallorca by the Pilar and Joan Miró Foundation in 2004 and in Madrid by the National Library in 2005. This work also has the particular admiration dedicated by Gunter Grass in the Frankfurt Book Fair, October 2004.

Due to the limited print run of the work, this book is intended for institutions that guarantee its dissemination.

The nº1 of this Collection was delivered in February 2007 to the Spanish Kingdom by the Museum of Contemporary Art «es baluard», Palma de Mallorca.

The book was presented to the public on June 25, 2004 at the «Pilar and Joan Miró Foundation» in Mallorca and on March 15, 2005 at the National Library in Madrid. Adonis was guest of honour at the International Book Fair in Frankfurt, 2004. On this occasion, the book by the artist Adonis Visual Poems was also shown at the Fair.

For the day of the presentation we counted on both occasions with the invaluable presence of Adonis, who recited his poems in Arabic Language. Professors Pedro Martínez Montávez and Federico Arbós, translators of his work, spoke.

An audiovisual presentation was also made by Agustí Baró, in which some moments of the creation of the plates and their printing were shown, as well as images of the Mediterranean that surrounds us and that is an element that unites us with the other side of its shores and its cultures.

As can be read in the epilogue of the work: Adonis Visual-Poems arises from the need to respond to the culture of human fear and horror, which is developed between the years 2001-2004, time that occupies the process of the work.

We accompanied the event with music that emerged in different places on these shores of the Mediterranean, eastern and western, to achieve a greater fusion or cultural, artistic and plastic mix. 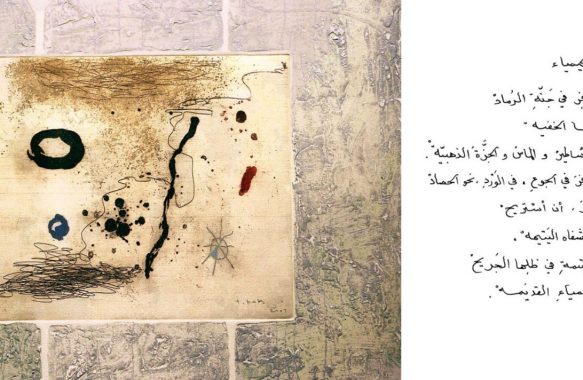 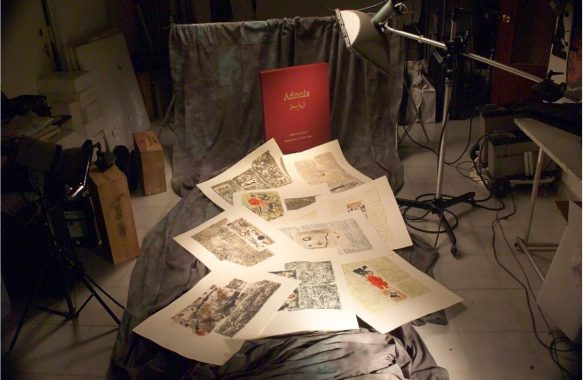 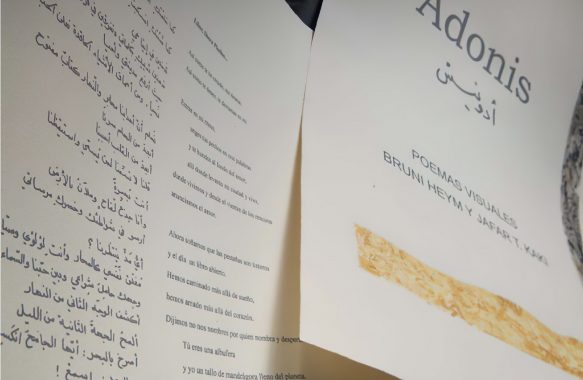